The instruments you recommend are very suitable for the testing needs of our laboratory products, after-sale is very patient to answer all our questions, and guide us how to operate, very nice.

You are very professional partners and we are willing to establish long-term cooperative relations with you.

On behalf of the company to visit your factories and companies, the technical staff is very professional and patient, I think I would be happy to cooperate with you again.

The machine is used to test bending resistance of different knives.

1. Clamp the handle of the sample to be tested in the pivoted clamp. Position the handle in the clamp so that during the test the tip of the blade or craving fork prongs and the end of the handle will remain in essentially the same horizontal plane.

2. Clamp the blade , or prong tip in the unloaded tip clamp, ensure that the hand lever is removed from the apparatus and set both scales to zero.

Turn the sample over and repeat the test in the opposite direction.

Knife & carving fork tool testing instrument  is widely used in knife or carving fork, Clamped at the handle and loaded at the dlade or prong tip , is raised until the load is just lifted.The angle of permanent deformation after release of the load is measured. 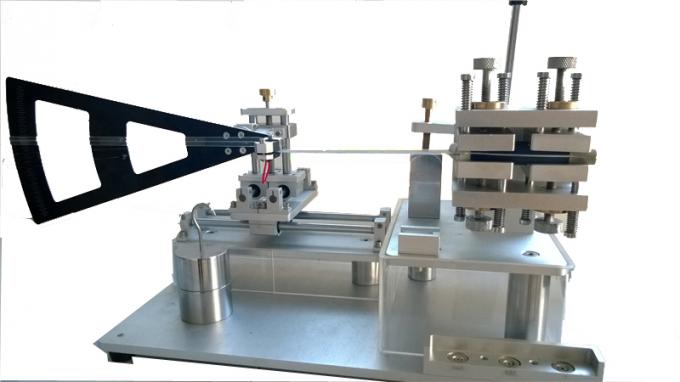 Length of the drum: approximately 500 mm